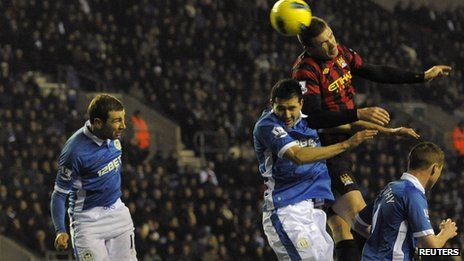 Wigan aren’t that bad. Okay, there are obvious deficiencies within the team, but their situation isn’t quite as hopeless as the league table suggests. There’s enough about this side for Roberto Martinez to produce a second successive miracle at the DW Stadium and keep them up.

The Catch 22 here, is that a lot of Wigan’s fallibility comes from their fragile confidence, which in turn will only start building once the results turn positive. The defending is tentative, their forward play even more so; what this side desperately craves is a bit of experience. The quality is there – Hugo Rodallega, James McCarthy, Victor Moses and Mohamed Diamy are all good enough players to compete in every fixture, and in Ali Al-Habsi they have a keeper who can keep them in games. Al-Habsi’s a funny one, and he doesn’t really get the credit he deserves. Too many pundits look at his unorthodox technique and bracket him as a liability, but the aesthetic of goalkeeping is always secondary to its results.

Hopefully, Roberto Martinez has funds for the January window – Dave Whelan is very loyal to his manager, and loves his club’s Premier League status, so there’s no reason why modest financial support shouldn’t be there. The first point of call? A new centre-back. Literally anybody, because Gary Caldwell doesn’t quite have enough nous for this level of football. He works very hard, and is clearly committed, but Wigan need more in the middle of the defence – more size and more ability. An experienced Premier League defender on loan – not even an elite one – would give this team so much more security.

I really like Victor Moses and Hugo Rodallega, they’re capable of creating problems for most teams, but there’s a sense that there’s too much required of them at the moment. They’re both playing from deep so much, that actually seeing them in and around the box – i.e. where they’re most pertinent – is actually quite rare. What a difference a goal-scorer would make to this team, you could play Rodallega and Moses wide, and let them attack their full-backs whilst also encouraging them to drift inside.

A name for you – Nicky Maynard. The contract rebel will leave Bristol City this month, and it will be either to the upper echelons of the Championship or the lower-depths of the Premier League. Wigan need to get themselves involved in the battle for his signature. Yes, the same problems exist – how do you attract a player to Wigan, what guarantees can you give him over sustained top-flight football etc – but Maynard is in need of a chance to prove himself at this level, and Roberto Martinez can provide him with that stage.