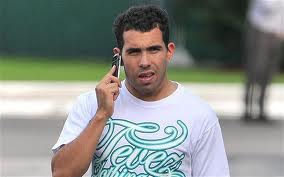 Manchester City in their affluent form can sometimes be slightly unpalatable; such is the nature of envy. However, I think it’s time for a sincere and hearty round of applause for the way in which the club have handled Carlos Tevez.

Ironically, the commodity that City possess that has turned us all green-eyed is the very same one that has enabled them to strike a blow against player-power. Minor and subsequently insignificant as it will soon be, I’ve still enjoyed it.

Carlos Tevez is guilty of the majority of the last paragraph, and it’s warmed my heart to see City flex their financial muscle to spite him. It would have been all to easy for Sheikh Mansour to write the net loss off on Tevez, and allow to move to the first club willing and naive enough to take him – and it would have been forgivable, the Argentine is the proverbial dressing-room cancer after all.

“Absolutely not Carlos, you can train with the u10s until someone matches our valuation of you – and if they don’t, well that’s really more your problem than ours isn’t it?”

I’ve loved every second of it – because there’s nothing that Tevez or Kia Joorabchian has been able to do to force City’s hand.

“Oh he’s on enormous wages is he? So be it, we can afford to just keep paying them”

Ultimately, as we all know, as and when the ugliest man in all of South America does move to another club, it will all begin again – and buona fortuna to our Italian friends with that.

Lots of reports this morning – mainly from Italy – suggesting that Carlos Tevez is close to agreeing personal terms with AC Milan. Obviously the player is still sulking somewhere in South America, so it sounds like Kia Joorabchian has been busy on his client’s behalf.

There’s an obvious caveat here though, as the Rossoneri will still have to pony up the £40m that Man City will want for the player.

So let me get this straight. The player sulks about not being allowed to leave a club, he then refuses to warm-up and play in a Champions League game, he’s given ‘above-and-beyond’ support from the PFA, and he then flaunts that by doing a runner to Argentina.

Are AC Milan out of their mind? Wherever Tevez has played, there’s always been extra-curricular controversy – always; West Ham, Manchester United, Corinthians etc.

Why on earth would you think that exactly the same pattern won’t repeat itself in Italy. What happens if Real Madrid show an interest an he suddenly remembers how important it is for his family to live in a Spanish-speaking country? What about if he gets left out of an important game and it bruises his ego? What happens if Milan fail to reach his bi-annual demand for an extravagant pay rise?

All that being said, the club do currently have a forward line of Zlatan Ibrahimovic, Robinho and Antonio Cassano – so if anybody can deal with cartoon-like personalities with exaggerated senses of their own ability then it’s Milan.

Players like Tevez are a disease in the sport, and I personally can’t wait until he leaves this country. However, you have to hope that City stay strong over his asking price, I’m full of admiration for how the club has dealt with this so far so please don’t let him get a cut-price move.