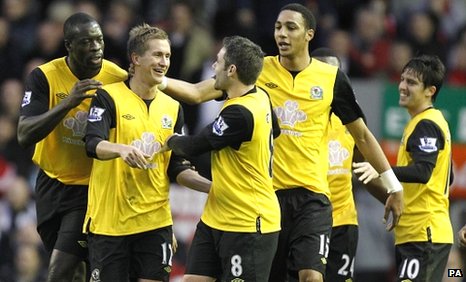 While Kenny Dalglish curses the profligacy of his misfiring team, credit where it’s due to Blackburn. Ravaged by injury, populated by teenagers, and rock-bottom of the league – a recipe for a hammering at one of the biggest grounds at the country? Not so.

Given the lack of experienced Premier League pedigree that Steve Kean has at his disposal, surely the much-maligned Scot deserves to take some credit for instilling within the players he does have enough desire to rage against the odds.

Blackburn are were they are in the league because of a lack of resources and the deception of their owners, conversely, the effort and determination of their players on Boxing Day was a credit to the club. Adam Henley, Grant Hanley, Jason Lowe, reserve goalkeeper Mark Bunn – Steve Kean has to be praised for equipping these players with enough belief to withstand the onslaught they faced on Monday.

What the fans who so shamefully abuse Kean might have to wake up to, is that while they may not like the manager, the players seem willing to play for him. Similarly, maybe they also need to recognise that they are part of the problem at Ewood Park.

Another game altered by another ridiculous refereeing decision. Those who cling to the ‘objectivity’ of an officials role need look no further than the Stadium of Light on Monday, because it’s an example of an ‘error’ rather than a ‘difference in opinion’. It’s not a penalty, it’s a farce.

How much longer must we wait before technology finally banishes this kind of absurdity from the sport? Maybe when the sport was amateur this kind of thing was acceptable, but not now, not with so much riding on each individual game. Fixtures should never be decided by referees, but the last few weeks has seen a flurry of games taken out of the hands of the teams by the official.

It’s just time, debating injustices has become utterly tedious – the game needs to catch up with every other major sport and embrace the assistance on offer rather than arrogantly dismissing it.

Honourable mention to Phil Dowd by the way.

Angered by Phil Dowd’s decision during Manchester United vs Wigan 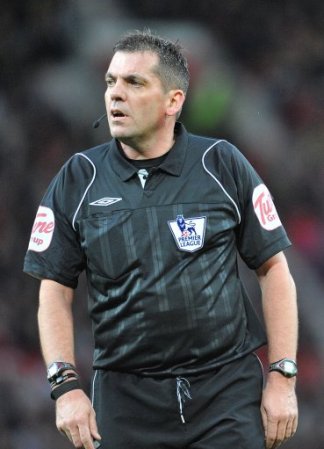 Phil Dowd’s decision to dismiss Connor Sammon angered me, it was so symptomatic of the way the game is refereed in this country.

Sometimes officials have to accept that contact between two players is incidental, and not malicious. Anybody that has played the game – to any standard – will tell you that sometimes contact occurs and that it’s perfectly plausible for it to be accidental. Given the pace with which the game is played, there has to be more common sense applied.

There’s too much of this in the Premier League, there are too many referees who see contact during an aerial battle and feel the need to get the red card out. It’s irritating; they must learn to distinguish between a fair contest and serious foul play. It’s not actually that difficult, because very rarely do you see a Premier League player deliberately swing an elbow into his opponent’s face.

There are no mitigating circumstances for Dowd either. He has a direct line of sight to the incident, neither Michael Carrick nor any other Manchester United player is demanding retribution, the crowd is unmoved, and the incident doesn’t take place at any great speed. It’s just inadequate refereeing.

“I’m at Old Trafford and I think I’ve seen a swinging arm – maybe it’s best just to send the player off. It’s only Wigan.”

I’m someone that’s reluctant to slag off referees, because the ‘conspiracy culture’ in our game is too prominent already – but when the officials are consistently making incorrect decisions, every week now, that change the course of a game, it’s hard to ignore. It’s so, so boring.

Best and worst of the weekend – Manchester City & Aston Villa 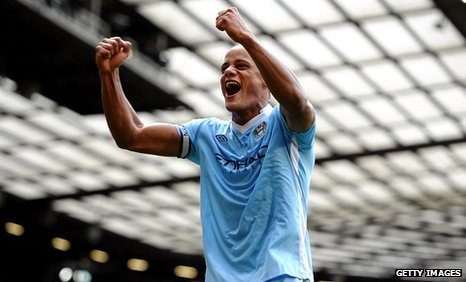 Perfect. It’s ironic given the typical concerns over big spending clubs, that this was result owed to the collective rather than the individual. From back to front this was a complete performance that showed off City’s diverse range of assets on the biggest stage of all.

The assurance of Joe Hart, the raiding and defending of Micah Richards and Gael Cichy, the presence of Vincent Kompany – all the way through to the delightful imagination of David Silva, and the high-octane qualities of Mario Balotelli.

The first twenty minutes aside, I don’t think I’ve ever seen a side leave Old Trafford having faced so little resistance. City were comfortable, there was no assault on their lead at any point – they were comfortable and in control. That’s a huge complement to Roberto Mancini, he’s built a team – or squad – capable of strangling the life out of the best that the league has to offer.

I wrote in the preview to this game that I hoped City didn’t freeze at Old Trafford, and that if they expressed themselves they could win this game. They did more then express themselves, for once we’re not talking about United’s failure to perform as a reason for a loss – it was the other team that just completely handled them.

How many times has that been said in the Premier League era? Put aside United’s anomalous results from the past – the Southamptons, the Middlesbroughs, and the Newcastles – this was different. This was not a team playing up to a home crowd, this was not a side showing ‘disgusting effort’, this was just a team going into United’s backyard and out-footballing the Champions.

Terrifying for the rest of the league.

Yes the tackle, but also Alex McLeish’s attempt to explain it away. “Shane Long was maybe favourite to get it, but Hutton’s gone from the ball and he’s collided in the follow through and that’s what’s injured him. Everybody doesn’t get injured from these challenges. He’s followed through and collided with the player. But how can you stop in mid-air?”.

Why was Hutton in ‘mid-air’ in the first place. Out-of-control, reckless, and incredibly dangerous – it’s indefensible. I’m all for managers showing solidarity to their players, but not when it’s at the expense of their own credibility.

A place well-deserved in this column for Alan Hutton, his manager, referee Phil Dowd for not sending the player off, and prematurely the FA – who will presumably be their usual spineless selves in not handing down retrospective punishment.

Want a free £20 bet on this week’s Carling Cup games? Get yourself to Paddy Power then…