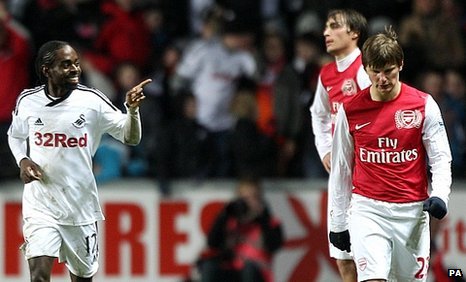 Such is the nature of the media in this country, I’m sure that most of the emphasis will be placed on Arsenal’s shortcomings – but really, the visitors were only as good as they were allowed to be.

The criticism of Swansea this season has been that despite their concentration of possession, they haven’t always used it particularly decisively. Not so yesterday; the triangles, the pretty patterns, the two touch play – it all seemed to have far more purpose yesterday. A cutting edge. Swansea were excellent and fully-deserved the three points.

A minor point but an important one; the reflex reaction to Theo Walcott’s equaliser was probably the most impressive moment of the game. There are too many sides in the league, and not just newly-promoted ones, who would have become very negative after such a concession. Passive play in the face of big reputation opposition is a default setting for a lot of teams – but Brendan Rodgers’ side showed the benefits of sticking to an original gameplan. Attack with pace, deploy as much movement in and around a shakey visiting defence, and hassle the opposition when they’re in possession in their own defensive third. 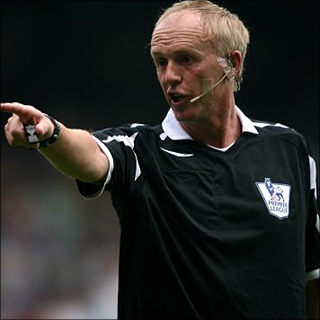 At least when refereeing decisions are given in Manchester United’s favour there’s a semblance of explanation for them. Not so here.

Danny Welbeck is in on goal – or in ref-parlance ‘has a clear goal-scoring opportunity’ – and Zat Knight impedes him. It’s a penalty and it’s a red card. It’s not even contestable. Had the defender been dismissed by Walton, then not even the most partisan of Bolton fans could’ve found an argument to dispute the decision.

The saving grace of course, is that the decision didn’t effect the result of the game, but that doesn’t excuse it. With every decision like this, a new precedent is set – another example that confuses what should be a really straight-forward issue. Last-man commits a foul? Off he goes.

I’ve heard all the arguments about how difficult the job is, how many cameras there are scrutinising, the pace of the game etc – but sorry, this was just a clear failure to apply the rules. Ineptitude at its worst.

Segue out of that quickly – who read Richard Scudamore’s comments about refereeing this morning? Here, if you missed them.